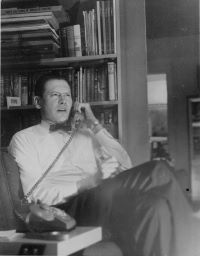 "He was six feet, four inches tall with a gentle southern accent and a sly sense of humor. His name was Gray Barker, and it can truly be said that he knew too much about flying saucers."

Gray Barker was a noted UFO writer, teller of tall tales, and hoaxer from the early 1950's until his death in 1984. Barker was noted for his dramatic style blurring fact with fiction to capture the imagination. He is best known for his book, They Knew Too Much About Flying Saucers—a description of Albert Bender's encounter with the Men in Black-and his own serial publication, The Saucerian—a collection of contactee stories and other bizarre UFO encounters.

The Collection consists of approximately 29 drawers of file folders, 300 books, 75 groups of magazines, photographs of Barker and various props used by Barker. It is located in historic Waldomore in the Gray Barker Room. The public is welcome to visit during our regular hours. If you cannot visit during these hours, feel free to contact David Houchin to set up an appointment.

The bulk of the Barker collection is made up of various magazines, magazine articles, newspaper clippings, conference advertisements and reports, and posters Barker gathered over the course of his life. Barker also carried on correspondence conversations with ufologists, avid enthusiasts, and fans from around the world maintaining the letter and copies of his replies.

The Barker Files are arranged alphabetically and divided by subject, person of origin, or year. Information pertaining to any subject within the world of ufology can be found among the files. Some of the more recognizable files would include the R. E. Straith Letter, the Men in Black, George Adamski, Howard Menger, Morris Jessup, and James Moseley. Information can be requested via mail, email or phone by contacting David Houchin or visiting the collection.

These books cover a wide variety of topics that considered to be on the edge of what is considered acceptable. They cover subjects such as the hollow earth theory, cryptozoology (Big Foot and the Loch Ness Monster), and the role of aliens in ancient religions. The collection is made up of an eclectic mix of scholarly discussions about the origins of religions, physics, space & time travel; but also includes many purely fictitious works about "Sexy Saucer People" and world domination.

The collection is based around the works that were written by Barker. However, it also includes many of the other works produced by the Saucerian Press, as well as, many of the standard ufological books. The collection maintains a complete run of James Moseley's Saucer News, now known as Saucer Smear, which is still in syndication. This collection provides insight in Gray Barker's vision of UFO and aliens, as well as ufology in the mid to late 20th century.

The Saucerian later known as The Saucerian Bulletin was Barker's personal magazine promoting the zany, bizarre, and exciting in the world of ufology. It was published from 1953 to 1962 when it became part of James Moseley's SAUCER News.

1. Please sign in before using the collection.
2. No food or drinks are allowed.
3. No personal items are allowed. Pencil and paper will be provided.
4. The door must remain open at all times. 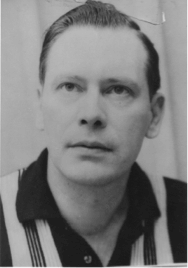 Gray Barker was born on May 2, 1925. He grew up in rural Braxton County, near the town of Riffle among a culture saturated with story-telling. Barker was introduced to science-fiction while studying at Glenville State College, which he continued to read as a hobby throughout his life. After graduating, Barker briefly taught English in a Maryland High School before he moved to Clarksburg to manage a small theatre. Barker eventually set up his own business booking films for local drive-ins and cinemas.

In January 1953, Barker's first UFO article, "The Monster and the Saucer," was published in FATE magazine. The article described the sighting of the 'Flatwoods Monster'—an alien with a spade shaped head and glowing eyes which occurred several miles from Barker's hometown of Riffle. In September, Barker released the first volume of his UFO magazine, The Saucerian. The magazine focused on UFO sightings and extraterrestrial encounters. Its success survived a name change in 1956, to The Saucerian Bulletin, and continued to draw readers well into the 1960s.

In 1956, Barker's first book, "They Knew Too Much About Flying Saucers," was published. The book was a dramatization of Albert Bender's meeting with three men dressed in black—a meeting that supposedly led to the demise of the International Flying Saucer Bureau. The book was a phenomenal success introducing both Barker and the Men in Black to popular culture. The Men in Black had long been a part of folklore representing evil before Barker presented them as a covert group sent to silence outspoken UFO advocates. "They Knew Too Much About Flying Saucers" forged Barker's career as a UFO writer; although he was never able to replicate its success.

In his article "The Wild Side of Ufology," Jerome Clark describes Barker as someone who

"realized early on that the UFO mystery was not likely to be solved by him . . . [and as such became] a collector of tales, rumors, reports, dreams, and lies. . .a few describe real events; . . . most, however, are exaggerations, distortions, or unadulterated fantasies."

Barker delighted in entertainment factor that could be found among the world of ufology. Barker was a well-known hoaxer among his day. The interesting thing is that Barker's hoaxes have continued to spark debate decades after being debunked. Barker's most well-known hoaxes are the infamous R. E. Straith and the Lost Creek Saucer Sighting.

The Straith Letter was Barker's most notorious hoax. It was carried out by Barker and good friend, James Moseley, in 1957. Using State Department letterhead, they wrote to George Adamski as R. E. Straith claiming that he and other department members had evidence supporting Adamski's experiences. While, it is believed that Adamski knew the letter was fake; he quickly publicized it as evidence supporting his claims. The letter sparked debate over Straith's existence, and spurred a federal investigation in which Barker and Moseley were both heavily questioned. The letter's origins remained a mystery until after Barker's death in 1984.

The Lost Creek Saucer sighting was brainstormed by Barker and James Moseley in early 1966. The idea was to produce footage of a flying saucer. On July 26, 1966, they had John Sheets—one of Barker's researchers—hold a ceramic "boogie" saucer on a fishing pole in front of a car; while Moseley drove, and Barker filmed. Afterward, Moseley played the film during his UFO lectures, and Barker sold copies of the footage via his mail-order film business. Both men continued to claim that Sheets had innocently recorded the saucer landing. In "Whispers from Space," the footage is shown while Moseley discusses its origins.

Beginning in 1959, Barker expanded Saucerian Publications, which produced The Saucerian/The Saucerian Bulletin in Clarksburg, WV, to include books sales and production. The first book the Saucerian Press produced was Howard Menger's "From Outer Space to You." Saucerian Books also produced and sold works by Morris Jessup, Laura Mundo, and Michael X, which can be found in the collection. The business also sold overstock books from other publishers, and served as a mail order book service for hard-to-find or out-of-print works as noted throughout his personal correspondence, notably the "C" files.

In 1962, Barker sold The Saucerian Bulletin to James Moseley—the editor of SAUCER News. Soon afterward, Barker filed for bankruptcy. Barker returned to magazine publication when he replaced Moseley as the chief editor of SAUCER News for a brief stint between 1968 and 1970. In 1975, Barker set up another UFO magazine—Gray Barker's Newsletter. The newsletter was produced until April 1984. SAUCER News was restarted in 1976 by its long-time editor, James Moseley. The publication is still produced--its current name is SAUCER Smear.

In 1970, Barker published his second best well-known book, "The Silver Bridge." In which, Barker regaled readers with the Mothman sightings that took place around Point Pleasant, WV before the collapse of the Silver Bridge in 1966. Throughout the 1970's and early 1980's, Barker continued to publish his own works as well as others via the Saucerian Press. In 1983, Barker released "Men in Black: The Secret Terror Among Us." In the book, Barker provided readers with additional and updated stories about the men in black. Barker may have gone on to write other works; these have not been confirmed.

End of an Era

"With Barker's passing, we must surely close the door on the 'classic' era of saucer research—an era which really ended in the 1950's, with mere echoes in more recent years."

In the autumn of 1984, Barker began to struggle with a difficult illness. He was admitted and released from a local hospital in October. By late November, Barker had been admitted to an Intensive Care Unit in Charleston, WV. He died there on December 6, 1984. James Moseley commemorated Barker's passing with a column devoted to him. Barker's death was noted by publications throughout the UFO community.

Over the course of his life, Barker frustrated many ufologists with his well-crafted stories and cleverly devised hoaxes. Barker wrote what is (and at that time was) considered science-fiction; even though, Barker preferred to classify his works as 'true stories.' Barker advised John Sherwood to remove a line stating the story was fictional, and to publish documents from the agency in the story to make the piece more realistic before he would publish it. Barker understood that by making the unbelievable believable, he could sell his publications.

While Barker's reputation as a scholarly writer was questionable, his creative writing style inspired a generation of readers to dream about UFOs. His works sparked debates among ufologists and enthusiasts around the world, pushed the boundaries of science fiction, and introduced UFO lore to popular culture. Barker was one of many writers who flourished during the heyday of UFOs. As UFOs fade, from the mainstream American psyche, the value of his works as science fiction will linger for future generations.